Wo he wo de zuguo 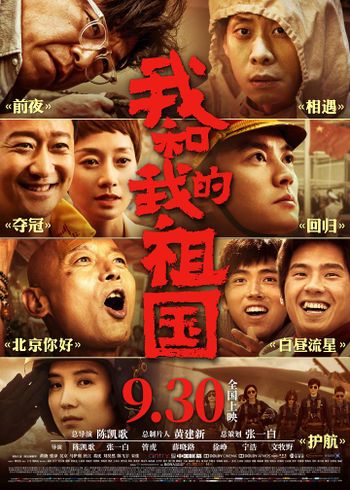 Wo he wo de zuguo movie poster.

Chapter Seven : 护航 (One for All)

The engine seems more likely a Pratt & Whitney Canada rather the Dongan WJ-5 of a Xian Y-7. Both are Chinese design based on the Soviet-designed Antonov An-24 series.

Alongside Beijing central business district (with the CCTV Headquarters on the far right), right over the Imperial City.

Flypast to mark the 90th birthday of the People's Liberation Army (1st of August 1927) is held in the Zhurihe military training base in north China's Inner Mongolia Autonomous Region on July 30, 2017.

PLAAF (People's Liberation Army Air Force) Chengdu J-10S of the August 1st aerobatics team.
(left) In front of the jet is Yu Xu (Chinese: 余旭) one of the first five Chinese female jet fighter pilot certified on the J-10 (2012) who served as a flight squadron leader in the aerobatic team. She died at 30 during an aerobatic training session on November 12, 2016 after being struck by another plane as she ejected from the J-10. She got her wings on September 2009 among the first sixteen female graduating from jet course of the flight academy.

Narrow-body airliner programm launched on 2008 and resulting to a prototype's maiden flight on 5 May 2017. At the movie's release date, only four prototypes had made their first flight. Most probably we see one of the first three airframes (wearing registration B-001A or B-001B or B-001C).

Antonov An-2 (or more likely one Y-5, its Chinese licensed-built or variant) used for crop-spraying.