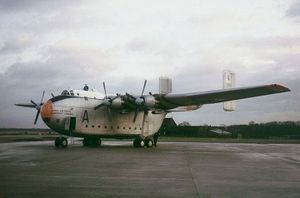 Blackburn B-101 Beverley C1 of the Royal Air Force.

The Blackburn B-101 Beverley was a 1950s British heavy transport aircraft designed and built by General Aircraft as the GAL.60 Universal Freighter. The aircraft was designed for carrying large bulk loads and landing them on rough or imperfect runways, or mere dirt strips. When it entered service it was the largest aircraft in the Royal Air Force . In total, 49 of the aircraft were produced.

This page lists all films that feature a variation of the Blackburn Beverley.