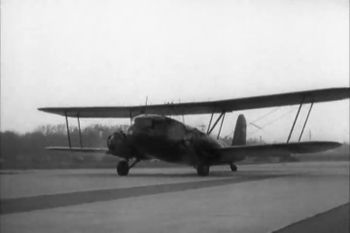 The Curtiss T-32 Condor II was an american transport aircraft designed for 12 passengers. This biplane was intended for night flight but some airframes have had 15 seas for daylight flight. Variant for transport or cargo were bought by air forces of China and some South American countries. Eight of them were even used as bomber.

This page lists all films that feature a variation of the Curtiss T-32 Condor II.