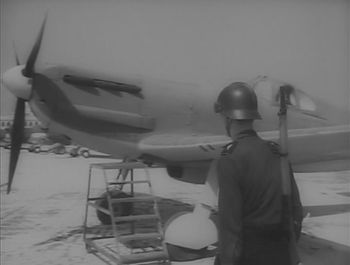 The Dewoitine D.520 was designed in response to a 1936 requirement from the French Air Force for a fast, modern fighter with a good climbing speed and an armament centred on a 20 mm cannon. The first flight occured on 2 October 1938 but deliveries started at autumn 1939, the first flight unit, the Groupe de Chasse I/3, receiving its first aircraft in January 1940. By 10 May 1940, when Germany invaded France and the Low Countries, 228 D.520s had been manufactured, but the French Air Force had only accepted 75. This valuable fighter was slower than the Bf 109E but superior in manoeuvrability. By the armistice at the end of June 1940, 437 D.520s had been built with 351 delivered. After the armistice, 165 D.520s were evacuated to North Africa. A total of 153 D.520s remained in mainland France, in service for the Vichy Air Force as the main fighter. Other examples sized by german forces were sold to Regia Aeronautica and Bulgaria or used by the Luftwaffe as advanced trainer (once the invasion of Vichy done in November 1942). Several airframes left by retraiting german units were used by Free French (F.F.I.) units in ground attacks against the isolated German pockets of resistance on the South West of France and the Western coast. These battles the second half of 1944 were preceded by a handfull of D.520 used by Free French in Middle East in 1941 (when Vichy forces left Lebanon) for training purpose (look at Normandija – Neman). North Africa examples after november 1942 flew a few patrols during the Tunisia Campaign, but were relegated to training duties at the fighter school in Meknes from 1943. Last examples flew as advanced trainers until 1948.

This page lists all films that feature the Dewoitine D.520.