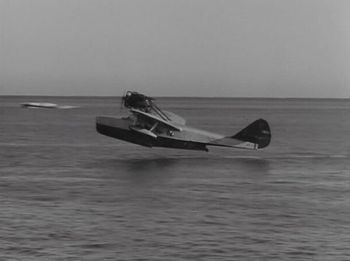 The Douglas Dolphin was an American amphibious flying boat designed in 1931 as six (or eight) seats airliner. Just after the Great Depression, the market was limited so Douglas considered too military transport tasks and search and rescue duties. Orders were registered from the U.S. Army Air Corps and the U.S. Navy and the United States Coast Guard. This led to various designations throughout the years as the type soldiered on until the middle of World War Two. Four airframes were used by the Royal Australian Air Force. The last airworthy Dolphin was a civilian one near San Francisco in the beginning of the 1960's until the 1990's. It's now part of the National Naval Aviation Museum at Pensacola Florida, painted as US Coast Guard military RD-4.

Only 58 Douglas Dolphin have been built.

This page lists all films that feature the Douglas Dolphin.