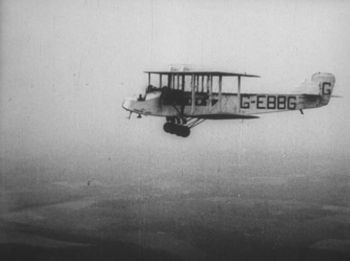 Handley Page H.P.W8B seen in The Imperial Airway - The Work of the British Airways .

The Handley Page W8, W9 and W10 were British two- and three-engine medium-range biplane airliners designed and built by Handley Page.The W8 (also known as the H.P.18) was the company's first civil transport aircraft. It housed two crew in an open cockpit and 15 passengers in an enclosed cabin. The prototype first flew on 4 December 1919, shortly after is was displayed at the 1919 Paris Air Show at Le Bourget. The W8 was subsequently revised to give the W8b, W8e (H.P.26), W9 (H.P.27) and W10 (H.P.30). It was operated by British airlines, Handley Page Transport, Imperial Airways, and Belgian SABENA with SABCA built in Belgium.

This page lists all films that feature a variation of the Handley Page W.