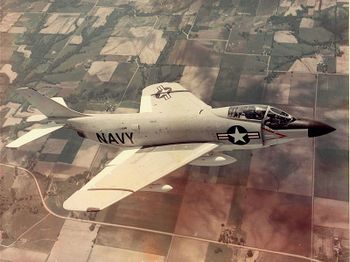 The McDonnell F3H Demon was was a subsonic swept-wing carrier-based jet fighter aircraft. Development work began in 1949, using a swept wing from the start. But if the first flight occurred in 1951, the trouble Westinghouse J40 engine was eventually replaced by the Allison J71 engine. The engine also suffered from frequent flameouts and compressor stalls. Suffering a high rate of loss, the fighter is also remembered as one of the very first armed with missiles (the AAM-N-2 Sparrow I).
In September 1962, the F3H was redesignated F-3.

This page lists all works that feature a variation of the McDonnell F3H Demon.