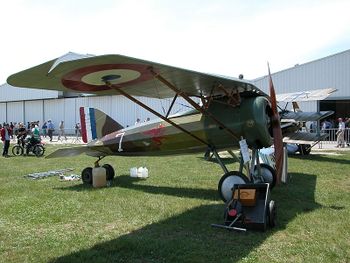 The Morane-Saulnier AI was a French parasol-wing fighter aircraft produced by Morane-Saulnier during World War I. The AI was developed to replace the obsolete Morane-Saulnier Type N. Its engine was mounted in a circular open-front cowling. The parasol wing was swept back. The spars and ribs of the circular section fuselage were wood, wire-braced and covered in fabric. The production aircraft were given service designations based on whether they had 1 gun (designated MoS 27) or 2 guns (designated MoS 29). A total of 1210 aircraft were built.

This page lists all films that feature the Morane-Saulnier AI.