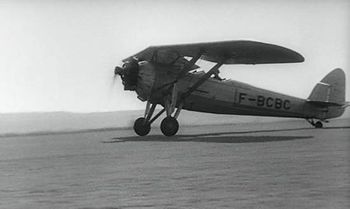 The Morane-Saulnier MS.315 was developed from the earlier MS.300 primary trainer and related variants and first flew in October 1932. It was powered by a 135hp Salmson radial engine. Around 350 aircrafts were produced including further engine improvement as MS.316 and MS.317 in the 50’s and early 60’s, mostly for civil glider tugs use.

This page lists all films that feature a variation of the Morane-Saulnier MS.315.