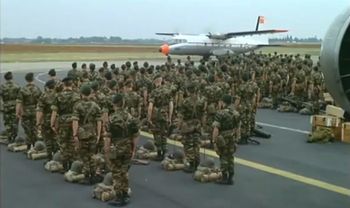 Usually simply called Nord 262, this aircraft was derivated from a design drawn by Max Holste (the squared fuselage MH-250) at the end of the 1950's. Quickly, the aircraft was powered no more with radials but with turboprops and changed its name for MH.260. As the programm was very ambitious for this company, an agreement with Nord Aviation was signed to ease the production. But after the succesful test flights of the two prototypes (MH 250 and MH 260), a third design with a circular fuselage and capacity up to 26 seats was named Nord 262. The high-wing airliner was ready for production by Nord Aviation (later Aerospatiale -from 1970-) and the line was stopped in 1976 after the 110th aircraft. French Air Force ordered the D variant and christened it Frégate and retired the type in 2004. The French Navy used twenty aircrafts, most of the A variant later upgraded to the E standard. The last one flew in 2009.

This page lists all films that feature a variation of the Nord Aviation Nord 262.