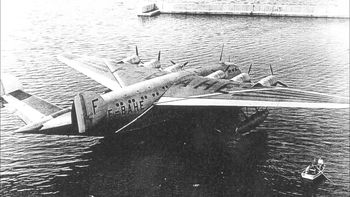 The SNCASE SE.200 Amphitrite also known as "Sud Est 200", was a French floatplane designed on the edge of the Second World War. First flight occured on October 1942, a few days before German troops invaded the unoccupied zone of the Vichy France. The first prototype was seized by Germans and sent in their flight test center at the Bodensee (where the RAF sunk it in April 1944). The three other ones were destroyed or badly damaged in an USAF air raid during March 1944. Only the third airframe was salvaged and rebuilt and eventually made its maiden flight in May 1946. Test flight reached an end in November 1949 due to a hard landing by mirror sea (very difficult to know when practising the round-out): the aircrat "splashed" deeping up to five meters before floatting again ! Then the airframe was raised on docks of the Marseille Marignagne airport and kept there until the mid 1960's. It became a tourist sight during 15 years before being scrapped. The remains of the first SE.200 were raised from the Bodensee close to this date.
With a wingspan of 52 meters (171 feet) by a length of 40 meters (132 feet), this flying boat (nearly 33 t / 72,000 lb when empty and reaching up to 72 t / 158,000 lb) was among the biggest one of the time but was penalized by six unreliable engines... and the 1940 defeat.

This page lists all films that feature the SNCASE SE.200 Amphitrite.