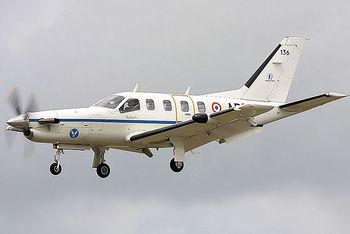 The design of the TBM family originates from the Mooney 301, a comparatively low-powered and smaller prototype Mooney developed in the early 1980s. Following Mooney's acquisition by French owners, Mooney and SOCATA held a series of in-depth discussions on the potential for co-developing a new enlarged turboprop design derived from the earlier 301; these resulted in the formation of a joint venture for the purpose of developing and manufacturing the envisioned aircraft, which was designated as the TBM 700. From the onset, emphasis was placed upon the design's speed, altitude, and reliability. Upon its entry onto the market in 1990, it held the distinction of being the first high-performance single-engine passenger/cargo aircraft to enter production.

Shortly after launch, the TBM 700 was a market success, which quickly led to the production of multiple variants and improved models, often incorporating more powerful engines and new avionics, amongst other features. The TBM 850 is the production name assigned to the TBM 700N, an improved version of the aircraft powered by a single Pratt & Whitney PT6A-66D. In March 2014, an aerodynamically refined version of the TBM 700N, marketed as the TBM 900, was made available

This page contains all films, TV series, and video games that feature the SOCATA TBM.