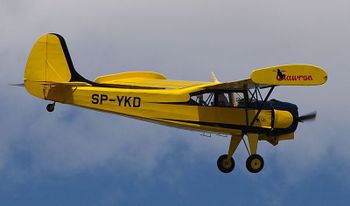 The WSK-Okęcie PZL 101 Gawron (English: Rook) is a Polish agricultural and utility aircraft designed and built by WSK-Okęcie (later PZL "Warszawa-Okęcie"). The first prototype flew on April 14, 1958, and the production of the PZL-101 started in 1960. From 1962 the PZL-101A variant was produced, with improved equipment, pilot's seat raised and a right-side door added. From 1965 a further improved PZL-101B was produced. Visible changes were: lack of "hump" above the fuselage and a bigger air intake below engine. Apart from agricultural planes, there were made four-seater utility planes and air ambulances. Until production end in 1968, 325 planes were manufactured, including 215 agricultural ones, 78 utility ones and 32 air ambulances.

This page lists all films that feature the WSK-Okęcie PZL 101 Gawron.