My private point of view about this movie and its time. 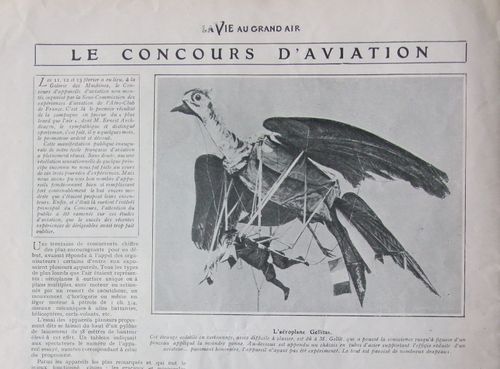 This document dated back from February 1905. Despite it shows the project of Mr Gellit the Gellitas (a mechanical bird model with a wing area of 2 m2 with a doll in place of the aviator), no record of a flight nor even a hover could testify of this crossed "eagle duck" flying machine with swingging wings.

Seven years later, Georges Méliès put a bus airfame under a pair of wings, a similar bird's head and a propeller. But the cabin has nothing of a passenger room but is rather a saloon (too heavy). Two years later, Albessard made a flyable Aérobus very différent !

Méliès was a prolific innovator who built the first studio complex in his mansion which garanted him a great succes. But after several years, such type of movie of movies with fixed camera and only studio shots were quickly in loss of interest.

In 1912, Méliès tried to renew the success of Le Voyage dans la Lune (A Trip to the Moon) (1902) but the audience was weak. This was the starting point of his decline.