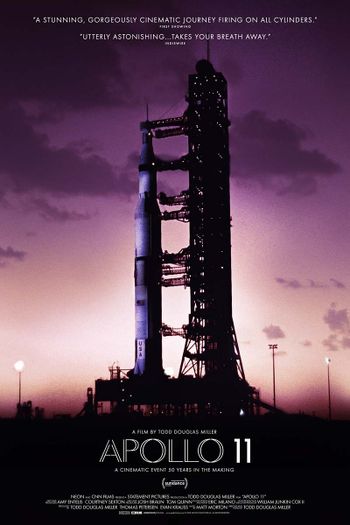 Starring:
Edwin Aldrin (Himself)
Neil Armstrong (Himself)
Michael Collins (Himself)

Neil Armstrong was seven times at the controls of the X-15, of which four flights were with this North American X-15A-3 s/n 56-6672.
Same aircraft in other movies at IMPDb: Frequently Seen Aircraft (Military Fixed-Wing).

Two T-33s with Northrop T-38 Talon in the background.

Lieutenant Buzz Aldrin in the cockpit of a North American Aviation F-86E Sabre of 51st Fighter Interceptor Wing. The nose art is Pluto (the famous cartoon character) running after a Mig-15.

Buzz Aldrin's first space flight was in 1966 on Gemini 12 during which he spent over five hours on extravehicular activity. Here seen beside the with the Agena Target Vehicle. The McDonnell Gemini Capsule is on the very bottom of the picture. 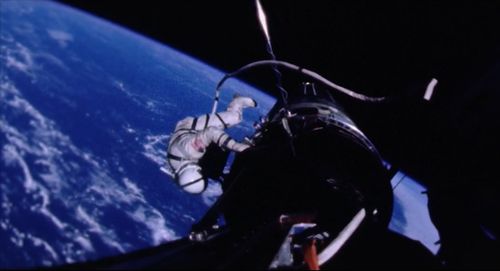 Grumman Lunar Module LM-5 still on the third stage (Saturn-IVB booster), as seen from the Apollo command and service module.

En route for the landing.

A model kit seen inside the Command Control Room : Apollo CSM docked to the LM.

Separation during the third lunar orbit (Apollo CSM on the left and the LM on the right, both seen from the other).

BuNo 152711 (c/n 61377) 'NT 66' nicknamed 'Old 66'.
Helicopter 66 was delivered to the U.S. Navy on 4 March 4 1967 and, in 1968, was added to the inventory of U.S. Navy Helicopter Anti-Submarine Squadron Four (HS-4). Its original tail number was NT-66/2711.
During the Apollo 8, Apollo 10, and Apollo 11 missions, Helicopter 66 was the primary recovery vehicle which hoisted returning astronauts from the spacecraft command modules.
Was then retagged Helicopter 740 but painted back as Helicopter 66 just the duration for the later recovery missions in which it participated (Apollo 12 / November 1969 and Apollo 13 / April 1970).
She also transported the Shah of Iran during the 1973 USS Kitty Hawk campaign.
Crashed and sank in the Pacific Ocean by night after 3,245 flight hours (June 1975). The four crew members were rescued but the pilot later died of the wounds he sustained in the crash.

Putting automatic camera on their rack.

Seen too on Episode 4: The Explorers When We Left Earth: The NASA Missions.

Reg. N1038V c/n 15938 Aero Spacelines B-377SG Super Guppy, a former Boeing 377 (as seen in Amici per la pelle) customized by Aero Spacelines for its own use.
Same aircraft in other movies at IMPDb: Frequently Seen Aircraft (Civil Fixed-Wing).