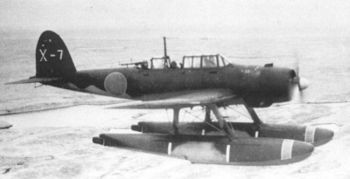 The Aichi E13A , allied reporting name: Jake, was a long-range reconnaissance seaplane used by the Imperial Japanese Navy (IJN) from 1941 to 1945. Numerically the most important floatplane of the IJN, it could carry a crew of three and a bombload of 250 kg. In China, it operated from seaplane tenders and cruisers. Later, it was used as a scout for the Attack on Pearl Harbor, and was encountered in combat by the United States Navy during the Battles of Coral Sea and Midway. It was in service throughout the conflict, for coastal patrols, strikes against navigation, liaison, officer transports, castaway rescues, and other missions, along with some kamikaze missions in the last days of war.

This page lists all films that feature the Aichi E13A.