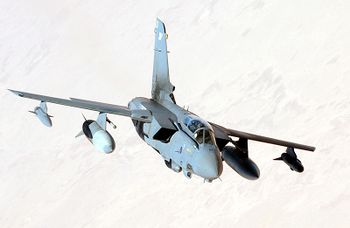 The Panavia Tornado is a series of twin engined, variable-sweep wing combat aircraft developed by the aviation industries of the UK, West Germany and Italy. There are three main variants of the Tornado: the Interdictor/Strike (IDS), ground attack and fighter/bomber; Electronic Combat/Reconnaissance (ECR), air defence suppression version; Air Defence Variant (ADV), for air interdiction. It was first introduced in 1979 with the IDS variant and its first major operation in the Gulf War.

This page lists all films that feature a variation of the Panavia Tornado.