It's another Christmas and Lt. McClane is off to meet his wife but yet again more terrorists plan to disrupt his life. When the authorities lose control of the airport systems and with it any ability to land the aircraft, it's up to McClane to stop the terrorists and bring the planes down safely, including the one carrying his wife.

Seen throughout the film as Holly McClane's plane. Registration N765BE, c/n 193P-1105 built in 1975. Northeast Airlines (NEA) is a fake airline created for the movie; the aircraft was actually operated by Hawaiian Airlines at the time of filming. Scrapped in 2004. 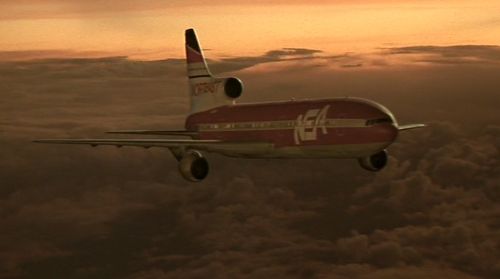 A 'Fuji Air' Tristar is seen whilst Dulles transmits its final message to approaching aircraft. This is actually N303EA, c/n 193A-1004.

During final transmission from Dulles Tower.

Seen taking off from Washington D.C. International Airport and at various points throughout the film.

Meant to be the same 727, but livery is different and must be found out. 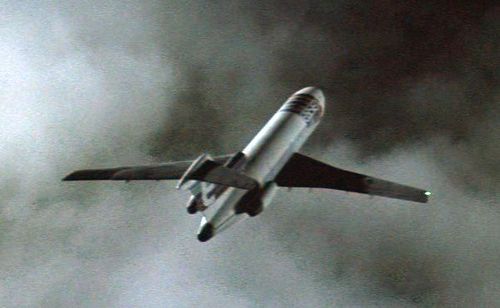 These F-4s are used to escort General Esperanza's plane. A loosely mock of the real plane (surprising for an american movie with all these F-4 stocked in Mojave or elsewhere).

Close up of the Phantom's mock.
Error creating thumbnail: Unable to save thumbnail to destination

Seen on a postcard.

Esperanza's Plane: this aircraft is not actually a production aircraft but a CGI/add-on composition or heavily modified airframe. The body is from a C-123 Provider, wings having four jet engines instead the usual two radial engines. The real C-123 has no ejection seat.
It has a code of 709 on the nose.

McClane's ride to the terrorist. Registration N300CE, serial 1227 built in 1980.
Same aircraft in other movies at IMPDb: Frequently Seen Aircraft.

The terrorists try to escape using this plane before McClane puts an end to their plans.
Registration N473EV, c/n 19657/37 built in 1970.

Shot of the safely landed airliners at the end of the film. On the left, a Lockheed L-1011 TriStar of ATA-American Trans Air. In the center, a Boeing 747 of the fictional Fuji Air followed by Holly's Lockheed L-1011-385-1 TriStar 50 N765BE listed above and a McDonnell Douglas DC-10. The nose of another Boeing 747 to the right.