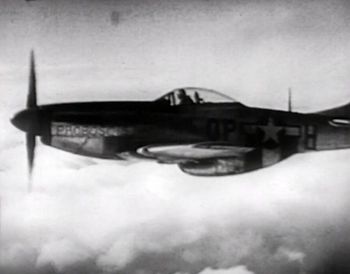 The North American Aviation P-51 Mustang was an American long-range single-seat World War II fighter aircraft conceived in response to a specification issued directly to NAA by the British Purchasing Commission. The first production Mustangs were used by the Royal Air Force (RAF) as tactical-reconnaissance aircraft and fighter-bombers : it was the North American A-36 Apache powered by an Allison V-1710. In 1942, use of the Rolls-Royce Merlin (and its license-built variant, the Packard V-1650) gave the P-51B (supplemented by P-51Ds from mid-1944) which were used by the USAAF as bomber escorts in raids over Germany. The P-51 was also in service with Allied air forces in the North African, Mediterranean and Italian theatres, and saw limited service against the Japanese in the Pacific War. At the start of Korean War the Mustang was the United Nations' main fighter but the role was quickly shouldered by jet fighters after which the Mustang became a specialised ground-attack fighter-bomber. In spite of being superseded by jet fighters the Mustang remained in service with some air forces until the early 1980s.