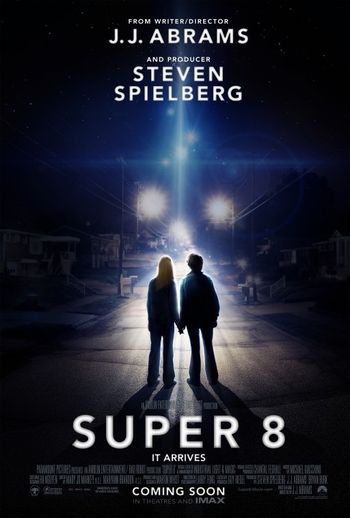 At the end of the seventies, some young teenagers have the project to run a movie festival and so met near the train station for a night shot. But a train disaster will change their hopes ...

The first lauch occured in 1981 but promotional posters were issued well before. Some of the text is hidden by a Star Wars TIE fighter model.

But the main tank kept in orange -not painted in white- dates only from the third launch.

Joe got two models in his room.

Unidentified Grasshoper or Light Personal Aircraft featuring on the panel base. Action is set in Ohio in the fictionnal little town of Lilian (Weirton, West Virginia in fact) but please note that there is a Lilian (without airfield) in the south of Alabama state.

Lilian airfield has a small museum with a showcase dedicated to the Battle of Britain. The painting "Eagles High" by Robert Taylor was issued in ... 1988.

The type was soldiered on for USAF staff until 1985.