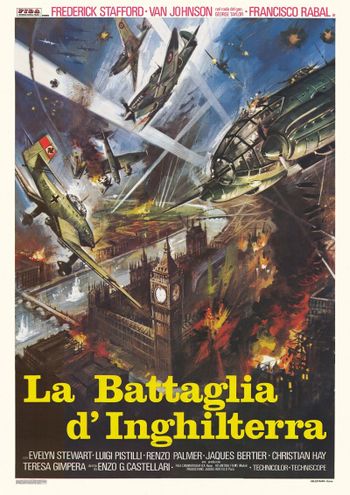 ... or acting as Junkers Ju 87 Stuka over the beaches.

British types acting as Luftwaffe fighters.
Such windshield is shared by Miles Master and Miles Martinet. Very surprising as despite built by thousands, these types were no longer in use and no surviving aircraft is known. Despite seen 'in flight', no evidence of that : the closeup avoids wings, engine and propeller. If really such aircraft, a heavy work to reshape the greenhouse and fairing was done to convert this two seat into a single seat fighter.
Note the I./JG 27 emblem on the cowling ... not yet existing during the summer 1940 despite the unit really took part in the fighting in the early stages of the Battle of Britain !
With a Supermarine Spitfire in the background.

Seen again later with different markings (this Puma (?) emblem is close to a Hungarian one)
Note that some emblem are real like the 2/JG 3 or the one of Jagdgeschwader 2 (JG 2) "Richthofen" ; as well as Kampfgeschwader 26 (this one seen on a bomber) :

English night bombing of Berlin. The machine gun was usually over the sight ...

Could be a Vickers Wellington but several points are uncorrect.

Still acting as RAF fighters ... during the night raid (no escort fighter during such mission, especially in 1940 !).

Among the Lufwaffe raid, if fighters are from British types, the bombers are these Spanish derivatives of the German Heinkel He 111, used in several other movies about the Battle of Britain (IMPDb: Frequently Seen Aircraft (Military Fixed-Wing)).

GU+AC Junkers Ju 87 B Stuka of the Luftwaffe.
Same aircraft in other movies at IMPDb: Frequently Seen Aircraft (Military Fixed-Wing).

Note the yellow North American T-6/Harvard in the far background.

The type reached the front line a year later ... and this model is of poor quality.