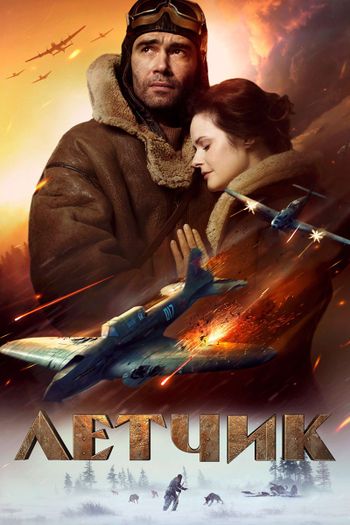 The pilot of a Shturmovik escape death after an arial combat but once crashed far behind ennemy lines, he suddenly realizes that his problems are just beginning in the middle of nowhere.
Loosely based on war life of Aleksey Maresyev, an Yakolev fighter pilot. Just before the credits a list of several pilots who have returned to combat at the controls of their aircraft appears.

Messerschmitt Bf 109 G-6 (with the blisters over the gun breeches in front of the windscreen). The variant made its combat debut only in February 1943 ...

The cockpit is an older Bf 109 E variant.

How surprising to see such flight : the basic Luftwaffe fighter patrol was the Rotte (two fighters) or the Schwarm (two Rotten).
Maybe this lone Focke-Wulfe was misplaced or had lost his wingman and eventually joined the 109 Rotte?
This is the only shot where we see this plane and this is another anachronistic fact as the first appearance of the Fw 190 on the Eastern Front occurred in September 1942.

Action set on January 1943.
(top right) a white Poliparkov I-153 and in the distance another Polikarpov under protection house (maybe a I-15 ?).
(left) some Mig-1 and the Polikarpov I-15 bis White 19 (see next section).
By late 1942, all Poliparkov biplanes still in service had been relegated to second line duties.

Reg. RA-2232G and (US Navy BuNo) 26939 still on her tail. Former N43NA, North American SNJ-4 Texan c/n 88-11798 built in 1943 and get civil registration on February 1997.
On 2010 suffered a light landing accident (right wing damaged) and written off of the US registry on 2013. Despite sold and based in Russia, still wearing US Navy markings and so only seen from front (Soviet Union never operated North American T-6 / North American SNJ-4 Texan).