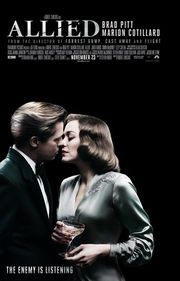 
It stars Brad Pitt as a Canadian intelligence officer and Marion Cotillard as a French Resistance fighter and collaborator, who fall in love during a mission in Casablanca.

Seen flying during bombing of London.

Seen parked or taxing at airport.

German bomber hit with AA fire, then crashes. Wreck is visible next morning.