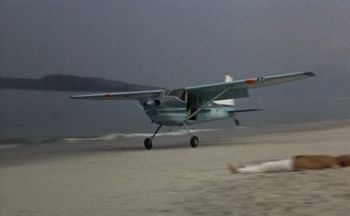 The Cessna 185, also known as the Skywagon, is a six-seat, single-engined, general aviation light aircraft manufactured by Cessna. It first flew as a prototype in July 1960, with the first production model being completed in March 1961. The Cessna 185 is a high-winged aircraft with non-retractable conventional landing gear and a tailwheel.
Over 4,400 were built when production was stopped in 1985.

This page lists all films that feature a variation of the Cessna 185.

The following 44 pages are in this category, out of 44 total.