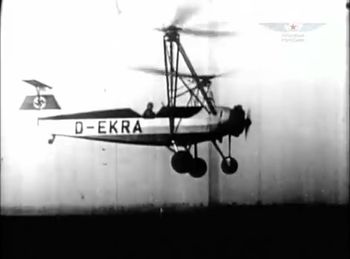 The Focke-Wulf Fw 61 was the first pratical helicopter. Using rotor technology licensed from the Cierva Autogiro Company, a single, radial engine drove twin rotors, set on outriggers to the left and right of the fuselage - the counter-rotation of the two rotors solved the problem of torque-reaction as also shown by Louis Breguet. The small horizontal-axis propeller directly driven by the engine was purely to provide the necessary airflow to cool the engine during low speed or hovering flight and provided negligible forward thrust. Despite it set the world records in its category far ahead the previous values, as an experimental machine, only two airframes (registrations D-EBVU for the first one and D-EKRA for the second one) were built (first flight on 26 June 1936). Both have been destroyed during WW2 bombing.

This page lists all films that feature the Focke-Wulf Fw 61.