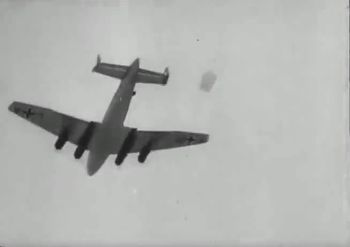 The Junkers Ju 90 was one of the very few four engined aircraft used by the Luftwaffe of the 40's. Its twin tail is an easy way to make the difference with the Focke-Wulf Fw 200 Condor. Designed during the late 30's, it was a long-distance commercial aircraft. A direct development was the Junkers Ju 290, a long-range transport and maritime patrol aircraft used by the Luftwaffe late in World War II got a Trapoklappe hydraulic rear loading ramp. This was the first aircraft with such part which is now common to nearly all tactical transport aircraft.

This page lists all films that feature a variation of the Junkers Ju 90 and Ju 290.