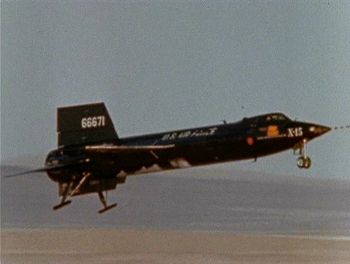 The North American X-15 rocket-powered aircraft/spaceplane was part of the X-series of experimental aircraft, initiated with the Bell X-1, that were made for the USAAF/USAF, NACA/NASA, and the USN. The X-15 set speed and altitude records in the early 1960s, reaching the edge of outer space and returning with valuable data used in aircraft and spacecraft design. As of 2011, it holds the official world record for the fastest speed ever reached by a manned rocket-powered aircraft. Five aircraft were used for the X-15 program: three X-15s and two B-52 bombers with a total of 199 test flights made, the last on 24 October 1968.

This page lists all films that feature a variation of the North American X-15.