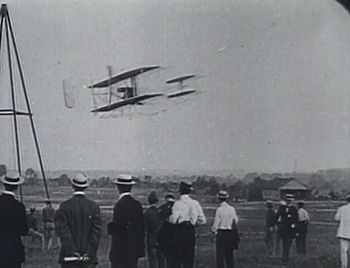 The Wright Model A was an early aircraft produced by the Wright Brothers in the United States beginning in 1906. It was a development of their Flyer III airplane of 1905. The Wrights built about seven Model As in their bicycle shop during the period 1906–1907 in which they did no flying. One of these was shipped to Le Havre in 1907 in order to demonstrate it to the French. The Model A had a 35-horsepower (26 kW) engine and seating for two with a new control arrangement. Otherwise it was identical to the 1905 airplane. The Model A was the first aircraft that they offered for sale, and the first aircraft design to enter serial production anywhere in the world. Apart from the seven machines the Wrights built themselves in 1906–1907, they sold licences for production in Europe with the largest number of Model As actually being produced in Germany by Flugmaschine Wright GmbH, which built about 60 examples.

This page lists all films that feature the Wright A.

Pages in category "Wright A"