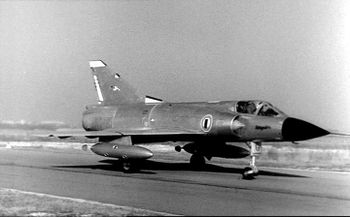 The Mirage III is a supersonic fighter aircraft designed in France by Dassault Aviation and manufactured both in France and a number of other countries. It was a successful fighter aircraft, being sold to many air forces around the world and remaining in production for over a decade. It was first produced in 1961 and many examples are still in operation as of 2011.

This page lists all films that feature a variation of the Dassault Mirage III.