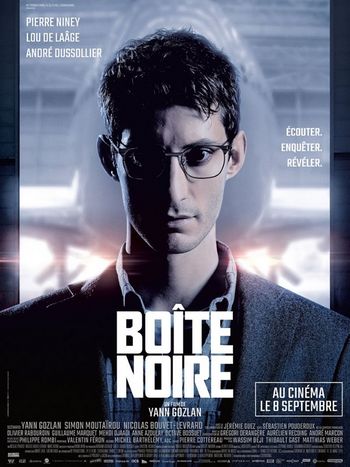 A young and talented black box analyst is on a mission to solve the reason behind the deadly crash of a brand new airliner.

A mysterious crash occured in the Alps involving the latest design of Atrian. This airliner could match with "the two other designer" but the crash did 300 fatalities.
To give substance to this promising model, the director used sometimes Unidentified (CGI) Aircraft :

This cockpit is a mix of latest Boeing and Airbus layout but the glass cockpit linked to side-sticks is close to the Airbus philosophy.
We sometimes see what seems to be an Airbus A330 ...

This is more clearly sometimes ...

The F-18 (yellow and green ring) is always away and blurred, so hard to say if it's an 'old' McDonnell Douglas F/A-18 Hornet or the newest Boeing F/A-18 Super Hornet.

Using evacuation certification footage when mixed passengers and crew exited the darkened aircraft.
Several times, we can see drawing and painting of a double-deck airliner (but devoid of any Airbus or real airline markings).

Mathieu Vasseur is working on the crash footage and featuring what is said to be a Delphin (!) ...

Two Gulfstreams in front of former hangar "Air Union" (now named "UTA") at Aéroport de Paris-Le Bourget.
On the left, G550 registration N415P, c/n 5312.
On the right, G450 registration N844GF, c/n 4160.
The Musée de l'Air et de l'Espace can be seen in the background, most noticeably its models of the Ariane 1 and Ariane 5 rockets and the Airbus A380 F-WWDD.
Same aircraft in other movies at IMPDb: Frequently Seen Aircraft (Civil Fixed-Wing).

(front) Helicopter wreckage. In the background, the fuselage of the Atrian 800 of the fictitious company : European Airlines.

Airbus A350 of British Airways.

Please note that an Airbus A350 is first seen around 36 minutes ...

Among Hall 6 "Concorde Hall", several aircraft are seen in part, blurred or not. They are ...

Dassault Mirage IIIC n°21 owned by MAE but displayed (and filmed) at the Musée Safran (at Réau, 30 km south-east of Paris; better known as Melun-Villaroche airfield).

Another piece from the Safran Museum collections.

Blurred ... which ones ?
Most probably the same as those seen when Mathieu goes to the Atrian's wreckage rebuilding hall.