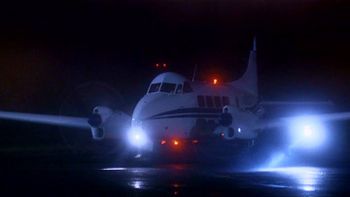 De Havilland DH104 Dove seen in The Life and Death of Peter Sellers .

The de Havilland DH.104 Dove was a British monoplane short-haul airliner from de Havilland, the successor to the biplane de Havilland Dragon Rapide and was one of Britain's most successful post-war civil designs. The design came about from the Brabazon Committee report which called for a British designed short-haul feeder for airlines. Production of the Dove and its variants totalled 542 including 127 military Devons and 13 Sea Devons. The first customer deliveries were made in early summer 1946, the last example being delivered in 1967.

This page lists all films that feature a variation of the de Havilland DH104 Dove.