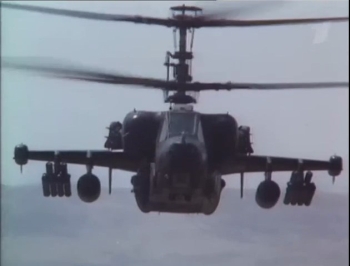 The Kamov Ka-50 is an attack helicopter which design started at the end of the seventies. Of the usual twin rotor contra-rotating formula for Kamov, it first flew on 17 June 1982. The collapse of the Soviet Union led to a severe drop in defense procurement. This resulted in a mere dozen Ka-50s delivered, instead of the planned several hundred. This first generation with tandem seats then a single crewman was held until 25 June 1997, when the revised Kamov Ka-52 with a two side-by-side cockpit flew for the first time. Another near a decade later, first orders for the Iraqi Air Force and a first (?) batch of 35 airframes for the Russian Air Force are ordered.

This page lists all films that feature a variation of the Kamov Ka-50 and Kamov Ka-52.