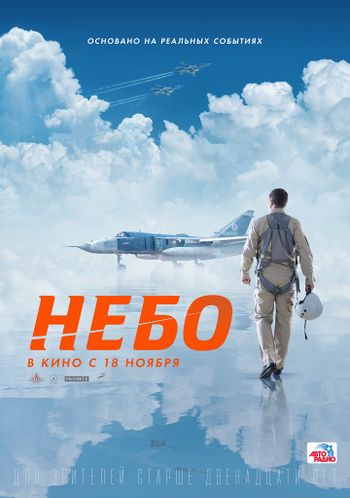 The film is based on events in the lives of the Russian air crew and ending on November 24, 2015, during a combat flight, their Russian Sukhoi Su-24 fighter jet was shot down by a Turkish fighter in northern Syria.

Ilyushin Il-76 in the background of some Sukhoi Su-24 and Sukhoi Su-25.

Two of them -including 01 red- escorting Soshnikov and Muravyov for a short time.
NOTA : over the months, Russia has deployed Sukhoi Su-27, two-seat Su-30SM and Su-35S aircraft. In early October, the Russian defence ministry admitted that Russian Sukhoi Su-30 aircraft were based at Khmeimim Air Base.

Red square on the right.

Sukhoi Su-27UB in the background.
Taking off for offensive mission ... without armament !

The most distant tails are typical of the Ilyushin Il-22 (airborne command post ... still wearing Il-18 on their fuselage). Tupolev Tu-154s on the right.

Reg. RA-78847 Ilyushin Il-76MD. Action of repatriation of Soshnikov's body to represent the real ceremony for Oleg Peshkov which occured on the evening (dark hours), 30 November 2015.