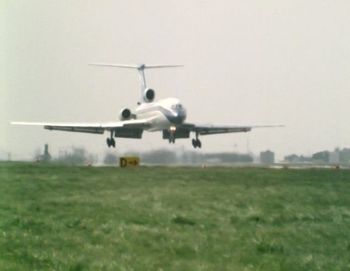 The Tupolev Tu-154 is a three-engined, medium-range Soviet airliner. It first flew in 1968 and entered service in 1970 with Aeroflot. A workhorse of the Russian airlines many others around the world, the aircraft proved itself as reliable and capable and remains in service as of 2011. With a maximum cruising speed of 975 km/hr (606 mph), it is one of the fastest civil airliners in service.

This page lists all films that feature a variation of the Tupolev Tu-154.

The following 98 pages are in this category, out of 98 total.