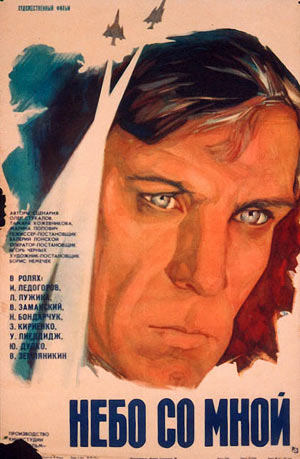 During the dogfight with the "Zlin Bf 109", close-up on the firing cannon.

Later, the same type is playing a backgrounded Luftwaffe fighter (Focke-Wulf Fw 190A).

At the engine start, the close-up shows (perhaps) just a Zlin 26 ?

During a glimpse, an archive footage is used.

A desk model of the Tupolev Tu-144 prototype, CCCP-68001 in Aeroflot livery. Seen again in the Tupolev design bureau on Wings of Russia (page 2) DVD10.
On the upper left corner, probably a Tu-134.

First seen at left, a model (with a Mil Mi-8 on the wall calendar).

The real one is seen taking off during an airshow in Japan.

On one of the picture of this history exhibition about the Great Patriotic War.

Only its landing gear is visible. Far away are probably the "Zlin 109" seen on top of this page.

Several scenes throughout the movie are shot during night road convoy.

Helicopter at center behind the crow and Fuji T-1A in white and orange (the Fuji T-1 was Japan's first indigenous jet-powered trainer aircraft. 66 airframes built.).

Between (and behind) both the North American F-86F Sabre and the Sikorsky CH-53. Mostly hidden by the Japanese man's head.