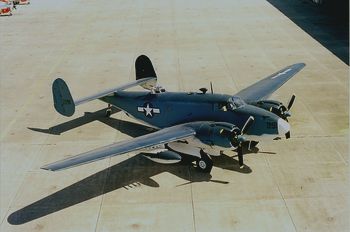 The Lockheed Ventura was a bomber and patrol aircraft of World War II, used by United States and British Commonwealth forces in several guises. It was developed from the Lockheed Model 18 Lodestar transport, as a replacement for the Lockheed Hudson bombers then in service with the Royal Air Force. The Ventura was very similar to its predecessor, the Lockheed Hudson. The primary difference was not in layout; rather, the Ventura was larger and heavier than the Hudson. The RAF ordered 188 Venturas in February 1940. The RAF placed a further order for 487 Ventura Mark IIs, but many of these were diverted to United States Army Air Forces service. The U.S. Army Air Forces placed its own order for 200 Ventura Mark IIA, which were put into service as the B-34 Lexington. Later redesignated RB-34. The PV-1 Ventura was a version of the Ventura built for the U.S. The main differences between the PV-1 and the B-34 were the inclusion of special equipment in the PV-1, adapting it to its patrol bombing role. The PV-2 Harpoon was a major redesign of the Ventura with an increased wing area. The Navy ordered 500 examples, designating them with the popular name Harpoon.

This page lists all films that feature the Lockheed Ventura.