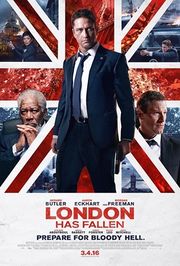 In London for the Prime Minister's funeral, Mike Banning discovers a plot to assassinate all the attending world leaders.

US President and his escort fly from Stansted Airport to London with this helicopter.

US President and his escort arrives in Stansted Airport with Air Force One.
Despite the subtitle, this was actually filmed at Dunsfold Aerodrome. "Air Force One" is actually registration G-BDXJ, c/n 21831/440 built in 1980, a 747-236B that was modified with its engines being placed into two-engine pods. The aircraft has been grounded at Dunsfold since 2005 and frequently appears in films - IMPDb: Frequently Seen Aircraft (Civil Fixed-Wing). Here it has been painted in the colors of Air Force One SAM 29000, but its fictional registration N88892 and engine pods can still be seen.