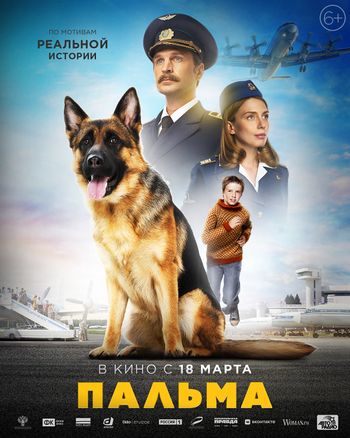 
A man goes for a long-term work abroad and leaves his dog Palma at the airport. The dog now meets every Ilyushin Il-18 hoping her owner will come back. Meanwhile, a boy who lost his mother is brought to live with his father, who abandoned him long time ago to pursue a pilot career.

Main action is around Ilyushin Il-18 flights and so several airliner are seen throughout the movie. No registration in evidence !
Nearly all aircraft (Il-18 or not) are wearing the Aeroflot colors.

A rearward view of the cockpit, a rare sight.

Ilyushin Il-76 of Russian Air Force on approach. This is an editor's error as this footage is used about the landing of an Ilyushin Il-18.

The Tupolev Tu-134A-3 of Russian Air Force seen on runway has been digitally modified by erasing the tricolor flag (on the tail) and stripes (under the blue line all along the fuselage).

Antonov An-12 of Aeroflot (most likely fake colors... but as the story is set on 1977 and several An-12s wore then such paint scheme and title).

Seen behind the Ilyushin Il-22. This is an anachronism, as Antonov An-140 made its first flight in 1997, 20 years after the events described in the film.

Another one seen on the right. Antonov An-2 on the foreground.

Antonov An-140 of Russian Air Force on right.

Minus the Russian Federation flag on the tail, such blue lightning is the distinctive paint scheme of some Russian Air Force trainers. By the lack of modiied nose, not the UBL variant; just a Tupolev Tu-134AK.

In front of the forest, a white airframe with a dorsal SATCOM canoe : the Ilyushin Il-80 (or Il-86VKP). Standing closer and in full axis of the camera, a small grey shape : an Antonov 24 or 26. An Ilyushin Il-76 to the right and (left) several Il-96-300PU of the Russian presidential aircraft fleet surrounding a Tupolev Tu-154 (note the T-tail). Once again, red and white stripes have been digitally removed.
Action probably filmed at Vnukovo International Airport.