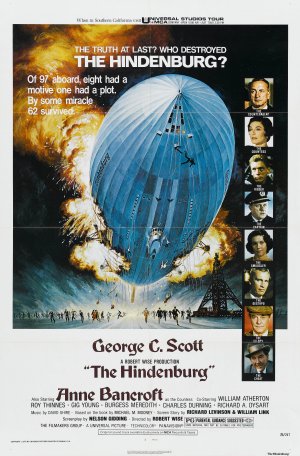 "In the Gay Nineties, ballooning really got off the ground."

The "semi-ridged airship with a light metal frame supported by...oops!".
Built by Surcouf but designed by Julliot, "Le Jaune" (The Yellow) flew in 1903.

Zeppelin of I Class.

Second of the three Zeppelin of F Class built.
Same aircraft in other movies at IMPDb: Frequently Seen Aircraft.

French designer Joseph Spiess registered a trademark for his dirigible in 1873. It took nearly forty years before he could build it with his own funds (manufactured by Société Zodiac) and offered it to the French Army in January 1913. France discovered then that it's design was more effective than claimed by it's designer.
Same footage seen in another movie at IMPDb: Frequently Seen Aircraft.

The font is shown.
Registration D-LZ130.

Registered as N109ME in 1975.
Acting as a Bf 109 B of the Condor Legion coming straight from Spain, a ferry flight over France unable to the Messerschmitt without refueling.

Despite the action taking place in 1937, the paint scheme and commanding chevrons are those used over the Russian sector in mid 1942.

Seen on the wall of the Hindenburg's smoking room.

Seen on the wall of the Hindenburg's smoking room.

Note the LZ-127 Graf Zeppelin on the right side of the screen.