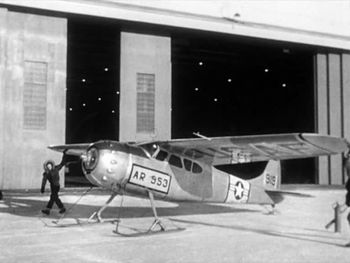 The Cessna LC-126A (the military version of the Cessna 195) seen in The Deadly Mantis.

The Cessna 190 and 195 Businessliner are a family of light single radial engine powered, conventional landing gear equipped, general aviation aircraft which were manufactured by Cessna between 1947 and 1954.

The 195 model was also used by the United States Air Force, Air National Guard and Army as a light transport and utility aircraft under the designation LC-126.
Including the LC-126s, a total of 1180 190s and 195s were built.

This page lists all films that feature a variation of the Cessna 190 and 195 and their military version.