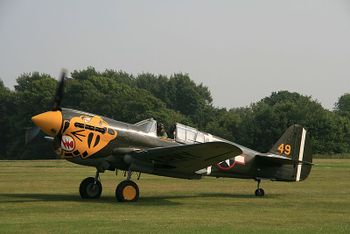 The Curtiss P-40 Warhawk was an American single-engine, single-seat, all-metal fighter and ground attack aircraft that first flew in 1938 and was a modification of the previous Curtiss P-36. It was used by the air forces of 28 nations, including those of most Allied powers during World War II, and remained in front line service until the end of the war. Warhawk was the name the United States Army Air Corps adopted for all models, making it the official name in the United States for all P-40s. The British Commonwealth and Soviet air forces used the name Tomahawk for models equivalent to the P-40B and P-40C, and the name Kittyhawk for models equivalent to the P-40D and all later variants. About 13,700 had been built.

This page lists all films that feature a variation of the Curtiss P-40.

The following 57 pages are in this category, out of 57 total.