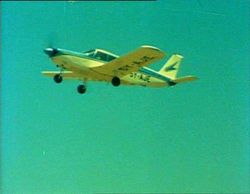 The Piper PA-32 Cherokee Six is a family of six or seven seat light aircraft made by the Piper Aircraft corporation between 1965 and 2007, with nearly 8,000 planes being completed in that time. The Cherokee Six began life as a heavily modified version of the Piper PA-28 Cherokee able to carry six people rather than four. Later on, the addition of retractable landing gear lead to the Piper PA-32R Lance which was later developed into the upmarket Piper Saratoga line.

This page lists all films that feature a variation of the Piper PA-32.