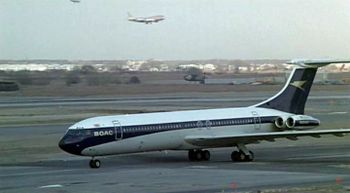 The Vickers VC10 is a long-range British airliner that first flew in 1962. The airliner was designed to operate on long-distance routes with a high subsonic speed and also be capable of hot and high operations from African airports. The VC-10 is often compared to the larger Soviet Ilyushin Il-62. Both aircraft have a rear-engined quad layout, the two types being the only airliners with such a configuration. It had been operated by major British airlines such as BOAC, British Caldeonian, British United Aiways, several African and Middle-East companies and the Royal Air Force. In 1964, a stretched version (13ft) Super VC10 was launched and operated by BOAC and Eastern African Airways.

This page lists all films that feature a variation of the Vickers VC10.