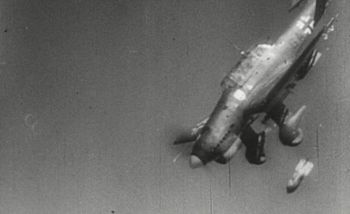 The Junkers Ju 87 was a German, two-seat, ground-attack aircraft used throughout World War II. It was most recognised as a dive bomber due to wailing siren and also distinguished by inverted gull wings and its fixed landing gear. An estimated 6,500 were produced between 1936 and 1944. It's one of the very few aircraft to soldier on from 1st September 1939 until VE Day.

This page lists all films that feature a variation of the Junkers Ju 87 Stuka.