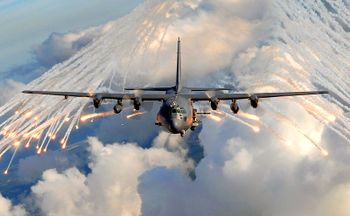 Lockheed AC-130U Spooky of the USAF.

The Lockheed AC-130 gunship is a heavily-armed ground-attack aircraft variant of the C-130 Hercules transport plane. The basic airframe is manufactured by Lockheed, while Boeing is responsible for the conversion into a gunship and for aircraft support. The AC-130A Gunship II superseded the AC-47 Gunship I during the Vietnam War. The gunship's sole user is the United States Air Force, which uses AC-130H Spectre, AC-130U Spooky, AC-130J Ghostrider, and AC-130W Stinger II variants for close air support, air interdiction and force protection. A total of 47 aircraft built in all versions.

This page lists all films that feature the Lockheed AC-130.