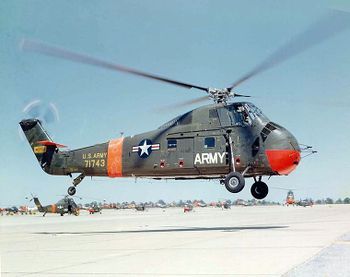 The Sikorsky H-34 Choctaw is a single-engined utility helicopter originally designed for the U.S. Navy but subsequently used by many armed forces throughout the world. Designated the S-58 by Sikorsky, it saw limited service as a civilian helicopter but was very popular with the military. The Westland Wessex is a licensed-built variation of the H-34 by Westland Helicopters in the UK.

This page lists all films that feature a variation of the Sikorsky H-34 Choctaw. For the license-produced Westland version, see Westland Wessex.

The following 66 pages are in this category, out of 66 total.