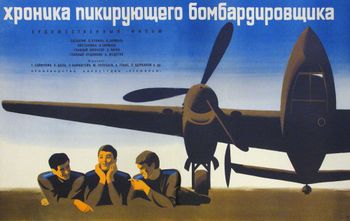 A single engine fighter at the break.

Star of the movie but with no more airframe flyable at the time, the director used lots of tips to achieve pretty good illusion. On the ground, most of the shots use real Petlyakov Pe-2.
But first, some archive footage.

Note the difference on the oil cooler intake.

Acting as Focke-Wulf Fw 190 of the Luftwaffe...

... but such mouth paint makes think to the La-5 of Soviet pilot Kostylev (Leningrad front on 1943) ! Pik As emblem was really the logo of German JG 53 (but usually it was black on a white square outlined with black).

Interesting use of this twin engine twin tail touring aircraft to act as the flying Petlyakov. Windscreen just lacks of some frame due to the panoramic glass of this civil aircraft.

How surprising to see this large single engine (note the square wingtips) acting the Polikarpov U-2 (curved wingtips) mail plane ! In 1967, lots of Polikarpov U-2/Po-2 were still flyable, isn't it ?

Still with its DOSAAF markings, isn't it ?
Acting a Messerschmitt Bf 109 ?

Some archive footage seen during the last fight.
Note the full bomb load; the F and G variants were dedicated to ground attack but kept most their fighter ability ... with a clean profile (i.e. bombs away).