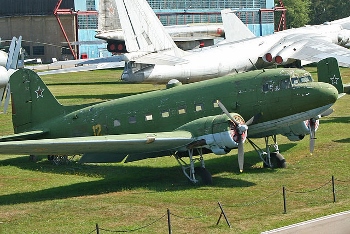 A Lisunov Li-2P.
The Lisunov Li-2 was a license-built version of the Douglas DC-3. The Soviets purchased 21 DC-3s for operation by Aeroflot before World War II and a production license was awarded to the Soviets on 15 July 1936. The aeronautical engineer Boris Pavlovich Lisunov spent two years with Vladimir Mikhailovich Myasishchev at the Douglas plant to modify U.S. customary units to metric units. Eventually, some more substantial changes were operated like the use of the Russian Shvetsov ASh-62IR engines, a Soviet development of the nine-cylinder Wright R-1820. They could be fully shuttered in order to cope with the extreme temperatures. Another notable change was the move of the passenger door to the right side of the fuselage. After two hundred airframes were built between 1939 and June 1941 at GAZ-84 factory (near Moscow), the production line was transferred at GAZ-33 in Tashkent (SSR of Uzbekistan). Some hundred of them were even armed with a dorsal turret and bomb racks. Production ceased in 1954.

Several thousand Lisunov Li-2s have been built. Only one is still flyable as of 2009.

This page lists all films that feature a variation of the Lisunov Li-2.