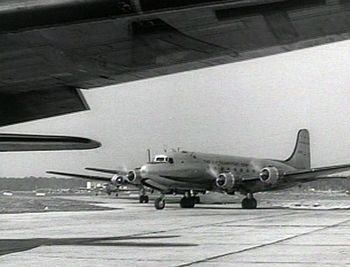 The Douglas C-54 Skymaster was a four-engined transport aircraft, derived from civilian airliner Douglas DC-4, used by the United States Army Air Forces and British forces in World War II and the Korean War. C-54s began service in 1942, carrying up to 26 passengers. (Later versions carried up to 50 passengers.) The U.S. Navy also acquired the type, under the designation R5D. Besides transport of cargo, it also carried presidents, British heads of government, and military staff. Dozens of variants of the C-54 were employed in a wide variety of non-combat roles such as air-sea rescue, scientific and military research and missile tracking and recovery. During the Berlin Airlift it hauled coal and food supplies to West Berlin. After the Korean War it continued to be used for military and civilian uses by more than thirty countries. This was one of the first aircraft to carry the President of the United States and to assume the call sign Air Force One.

This page lists all films that feature the Douglas C-54 Skymaster.